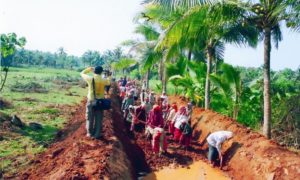 The scheme, therefore, is an answer to that uncertainty and offers one hundred days of employment in every financial year to adult members of any rural household who are willing to do unskilled manual work at the statutory minimum wage.

Who monitors and implements the scheme?

The Ministry of Rural Development of India or the MRD is actively monitoring the implementation of the scheme in close coordination with state governments.

The Objective of the MNREGS

The primary objective of MNREGS is to improve the lifestyle and livelihood security in rural areas. It aims to achieve this by providing at least one hundred days of guaranteed wage employment in a financial year. This would be provided to every household whose adult enrolls to volunteer for unskilled manual work.

Impact of the MNREGS

The act came into effect from the 2nd of February 2006. It initially started off with work on 200 districts and over the years has extended its support to 130 districts in 2007-08.

The MNREGS now covers roughly all the districts in the nation with the only exception being those where the population is 100 percent urban.

In the longer run, the scheme intends to provide a guaranteed income source for the underprivileged so that they do not get stuck in the tangles of poverty for the rest of their life.